Ex-Display Sale Now On. All Buildings are Normally Less Than 1 Year Old.
So This Is A Great Opportunity To Save Good Money On These Great Buildings

Why Choose A Garden Corner Summerhouse

In some instances the space in your garden is limited and the best option is a corner summer house to utilise that unused corner. And that is why it’s worth looking at our range of corner summer buildings to see which one will suit you the best. All of our summerhouse ranges are made from solid redwood deal – not cheap whitewood deal (Scandinavian pine on our log cabins) for the very best life and with a choice of T&G shiplap or loglap. The loglap goes very well with the loglap cladding. All doors and windows are joinery made (no cheaply knocked together units here) and are available in Georgian or classic styles. Our materials used are top quality ensuring a very well built garden corner room for you.

When we deliver your new corner summer room it will be assembled free of charge saving you all the hard work involved with that. You do need to arrange a solid level base for the building to go onto and it’s important that is level in both directions to ensure the best finished final building. The base can be concrete, paving slabs or even timber decking. We do have a service where we can build a timber subframe base for you and you would only then require a clear levelish area and this would even take that worry away. That’s got to be worth thinking about.

These buildings normally come in set sizes of 6×6 7×7 8×8 9×9 10×10 and these sizes are a little fixed as the building nearly always have to be square (with a corner chopped off) but if you are looking for something different it’s always worth asking. The doors and windows can be moved or omitted and the height can be changed if you need a little extra height. Talk to us and we may be able to supply a building to suit you and your corner in your garden. We always will do the best to help.

Can I Insulate My Corner Room After Delivery?

It is possible to insulate these buildings after delivery if you have semi reasonable DIY skills. All that is involved is to buy fibreglass insulation or polystyrene and then cut it to size to fit in between the internal timbers of the building. You would need to tack the fibreglass insulation into place before fixing an inner skin on plywood or hardboard (which sometimes has an attractive veneer on it) or maybe T&G boards. Polystyrene is a little easier as it is rigid and will stay in place on its own. The roof is a little more tricky as the fibreglass insulation tries to fall down as gravity is working against you. This will make fitting the roof boards in place a little more fiddly. Best to have 2 or 3 people to help with this. When you have completed the lining and insulation of your new building I recommend using cover strips over the joins to give a nice neat finish. If you would like your corner house lined and insulated for you then give us a call and enquire about our Platinum buildings.

It’s makes sense to be very wary when buying any sort of timber building and to look beyond a shiny brochure, colour leaflet or web page. The best advice I can give (after being in the timber building business since 1979) is to always try to view any intended purchase before signing on the dotted line. We have two garden building show rooms in Surrey where you can see for yourself the quality of these buildings. The range of buildings on show varies from time to time but there will always be examples of the Diamond, Platinum and Trentan models available to inspect at close quarters. It’s also worth checking out any customer feedback to see what previous customers may be saying about company and buildings on offer.

Be Careful When Buying A Corner Summerhouse

I’ve currently been watching a factual program on the BBC about the work of the local authority planning officers and their day to day decisions which they are making which affects their local communities. These decisions can involve large scale planning developments right down to small garden sheds, fences and corner summer houses. They also are involved in retrospective planning applications where permission was not obtained when required.

In a recent episode, a homeowner had been reported to the council about the size of his garden building in the corner of his property, if you can call it that as it was nearly 13ft tall. This building was used to house his collection of large vehicles for which he had a passion. On the corner of the building in his garden was a large lean-to structure which again was nearly 13ft tall. Personally, I think it did look too large for the garden.

The main reason for the objection was that the owner’s corner summerhouse backed onto a road at the side of his property. Normally you would not need planning permission if your building is more than 2m (6ft 6in) from the boundary. As the new building was going to be built at the corner of the house away from the main entrance, he had assumed everything would be alright. However, the public road at the side also needed to be taken into account and this is where the objectors thought they had a case. They also were concerned that the building was going to be used for commercial use as the homeowner was a truck mechanic.

The planning officers came to view the building and to see how it fitted into the corner of his property before any decision was taken. As there were so many local objectors a retrospective planning application had to be made and the decision would be taken by members of the council. The location of the corner building was noted and, as this was, more or less, hidden from the road this had to be taken into account.

In discussions with planning officers about the case was raised that the building was not affecting anyone else, there was an existing corner summer house and the reason they had bought the house was because of the large ground which came with it. They pointed out that the home owner’s hobby was his collection of large vehicles, a little different to most. This collection included a large truck, an articulated vehicle which was being converted into a camper van and a UniMog, a multi-purpose auto four wheel drive large vehicle capable of crossing the Sahara desert.

At the council meeting, the applicant’s wife spoke on his behalf as applicants were allowed 3 minutes to plead their case. She pleaded that she was a great believer in the rights of people in general and was fighting for the retention of this building on the belief that everybody has the right to play in the garden with their Tonka Toys provide they are not upsetting anyone else. Even though this was a strange hobby they were doing nothing wrong – just utilising the unused corner of the garden.

She must have swayed them to her thoughts as the building was granted retrospective planning permission much to the annoyance of some of their neighbours. This case just goes to show you need to be a little careful if there is any road or track nearby to where you want to build any buildings. If there is then a call to the local planning office will, hopefully, they won’t be any major problem.

Many years ago one of 1st Choice Leisure Building’s customers has a similar problem. He had built a large corner summer houses against his back fence but there was a track running through to houses alongside his rear fence. Because of this, he had to obtain planning permission, which was not a great problem, essentially a paper exercise. The location of the corner building was visible by planning officers on the way to work. The council offices were just around the corner from where the corner sunroom was located.

We believe that it is vital that you are given the opportunity to inspect a corner summer house before parting with your money so we have established two easily-accessible display sites near Guildford and Farnham in Surrey which, hopefully, is not too far away where you can come and see over 100 buildings from all of our main ranges of buildings. You can browse our corner rooms at your leisure without worrying about any high pressure salesmen pouncing on you (not that we would employ that type in any case!). If you need any help then we are there to advise.

Besides optionally insulating our corner summer buildings for you all of our wooden summerhouses (chargeable on log cabins), will be installed free of charge at the time of delivery providing there is a suitable base. And if there isn’t, don’t worry, we can build that for you too for a small extra charge. Experts in corner summerhouses for your garden. And so much more so take a small drive and come and see us.
Storrington Corner Building
Free Assembly Included 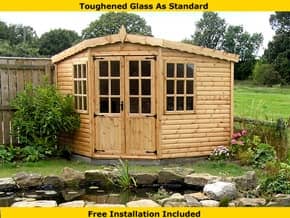 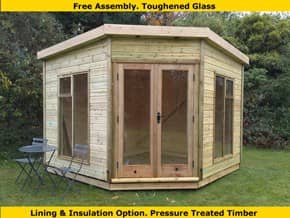 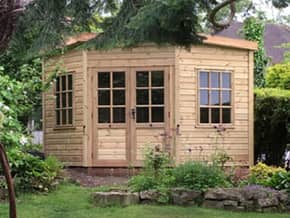