Free * UK Delivery
Visit Our Showrooms
Customer Satisfaction
Full Installation Service
1st Choice Leisure Buildings - Known For Quality - Loved For Design - Since 1979
Is This 12×12 Summerhouse The One For You?
Visit Our Show Room. Free Installation Service (*)
Insulated Option And Fully Bespoke To Suit You. ☎ 0333 800 8880 NOW!
Should I Choose Insulate My New Garden Building?
During the hot summer months or the winter, you may think about how can I make your summer building more comfortable. Adding insulation to it is one of the best ways to help keep it warmer in the winter and cooler in the summer. A wise investment. So the questions to ask are as follows: ... more
Buying A Summer Building? | Ten Questions To Ask Before Deciding

View Our Range of Stylish and Sturdy Summer Buildings. Or view all sun house sizes

1st Choice Show Room , nr Woking
All of our 1st Choice summerhouses can be made in size 12ft x 12ft to your exact requirements. Just let us know what you would like and we will quote for you. Don’t settle for second best. You know it makes sense. These 12×12 sun rooms can be made with internal partitions if you choose with extra doors creating several different areas. One for leisure, one for storage, one for the children. The choice is yours.
Photo Gallery 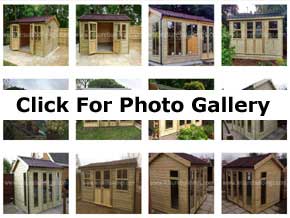 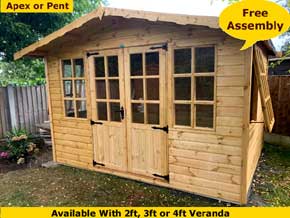 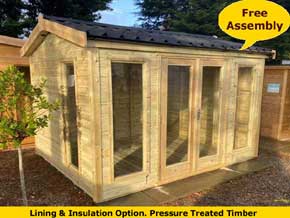 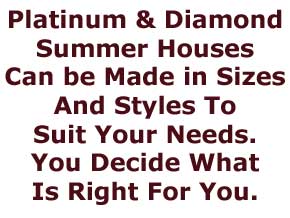 What’s in Your Out Buildings? Explosive Find Found in Summer House
The shed was in its heyday after the Second World War, which is understandable, due to the need to use the garden for growing produce for the family to use. Although most of these sheds, initially, were make do and mend which was one of the important message drummed into the country during this terrible time. Even rationing did not stop until the early 50’s for many food items and when we think how easy it is and the wide range of food stuffs available to us today, it’s hard to understand how people lived their lives then.

Fathers and grandfathers utilised these buildings and used their gardens in most of their spare time where they felt productive but also enjoyed what they were doing in general. I can relate to that as there is nothing better than digging up vegetables from your garden and enjoying them with your meal at home. Just the thought that from a package of seeds you can feed your family is great.

As I say these sheds were quite often ramshackle old buildings and were made up from any materials available whether it was timber or metal nothing like a 12 x 12 summer house which can be bought these days. Plastic was not really available very much in those days. The main thing was for the shed to keep the garden tools dry and a place to start the seeds off in pots before transferring them into the garden. Nowadays there are a large range of summerhouses which are available ready made to save them the bother.

These summer houses were also often full of items collected over the years which were kept ‘just in case’ however many of the men who had returned from active duty had brought back ‘souvenirs’ from their travels. Many of these souvenirs were not really suitable for collecting due to their volatile properties and this including grenades, bombs and guns etc. And over the last few years many of these souvenirs have become news items.

Earlier this year at a Leominster home a young man found a bomb in the family’s garden summerhouse. Initially they removed it and put it in their van, as you do (NO), before deciding this would be better off back in the shed. Which they thought having moved the bomb once was a good idea and then to move it a second time was another good idea beats me. He then decided to ‘Google’ what to do and finally decided to call the police.

When the police officers arrived they were able to ascertain that the bomb was in fact safe. How they decide I don’t know. The bomb had laid inactive for over 40 years, perhaps that’s what they go on.

The owner of the house was astounded about the discovery and said this was a shock to her system. This is the last thing you expect to find. Her husband had built shelves in their 12×12 summer houses shed as well as putting an old sideboard in there and she assumed the bomb was behind there. She was obviously happy the bomb did not go off.

Also, even more recently, there was another case in north east London where some grenades were found in another garden shed. It turned out that the occupant of the house, who died last year, served during the war and had many collectibles in his house and shed. These grenades still had their pins in them so potentially were very dangerous.

The lady who lived next door said she was very scared about what the outcome could have been. She had two little babies in the houses and when she heard the bomb squad were coming she went out, hopefully with the babies. The police said that they had received reports of two Second World War pineapple shaped grenades and acted accordingly.

It’s easy to think this could not happen to you but many years after we had removed an old 12 x 12 garden summerhouse and putting in foundations for a new swimming pool house we heard a clunk as we dug into the earth. Examining it a little closer discovered it was about 12 inches diameter and had a 1 inch stud coming out of the side. Undeterred we carried on digging until we finally got it out of the ground and it turned out to be an old water main.

However, in hindsight, we should have took more care. We joked that we had found a bomb but carried on. If this happened again I think I would call the Bomb Disposal Squad just to be sure. I think I rather look a fool than to get blown up. Perhaps this is what happens as you get older.

Take a look at our 12ft x 12ft Diamond summerbuildings as well as the Platinum summer rooms.